In the Greenpeace field at Glastonbury 2014, a vast replica of the Arctic Sunrise is built. With towering walls, a skate ramp incorporated into the middle and a hole bashed into the prow where the wooden champagne bottle was cast by Emily Eavis at the opening, this ship is going nowhere near the Prirazlomnaya drilling platform in the Arctic Sea.

Instead, festival goers ascend the steps in the bowels of the ship. As they climb through the scaffolding, they are surrounded by photos of the 30 activists who, while attempting to stage a peaceful protest against Arctic oil exploration, were arrested by the Russian army and charged with piracy. Up on deck, an expansive and refreshing view of the festival awaits – and an installation. Five funnels, each with a pair of headphones hanging in the opening, and a sign:

“Greenpeace is just a word, the people behind it are our strength. Real life stories have real people with names, faces and emotions. It wasn’t Greenpeace that was in jail, it was 30 people, 30 activists and crew members. In the words of Sini, Frank, Dima, Camila, Colin and Faiza, this is the story of the Arctic 30.”

This is an interactive audio installation using the testimonies of the Arctic 30 – to tell, in their own words, what happened when they sailed towards the Prirazlomnaya drilling platform in September 2013. Hidden inside the blue piping are individual mp3 players, with a simple magnet/reed switch connection soldered in to create a trigger when the headphones are picked up. Many hours of interviews with the activists were conducted by Ben Stewart (Greenpeace), and then edited down by Anagram into 5 chapters: the action, the arrest, going into the gulag, life in prison, release. The funnels were first installed at Glastonbury in June 2014, but will tour with Greenpeace at forthcoming festivals. 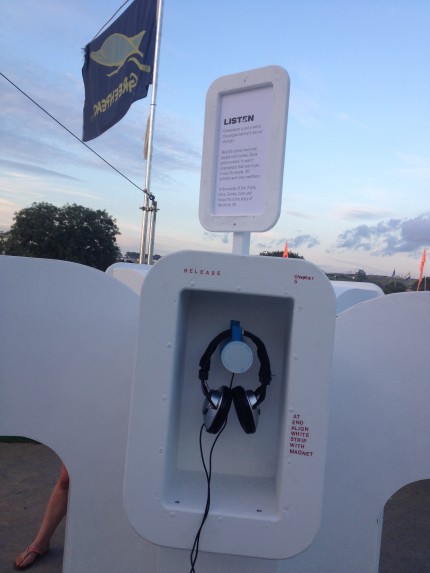