I See The Future

WHAT DO YOU SEE WHEN YOU IMAGINE THE FUTURE? 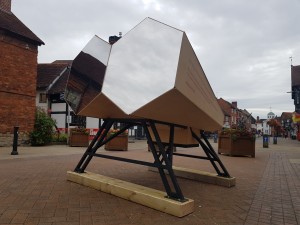 A smartphone that transports you to the other side of the world?

Flooded coastlines and power stations in the sky?

I See The Future is a participatory public art project, which prompts conversations about the future between communities.

Two giant pairs of binoculars curiously appear in public space, perhaps a busy high street in Middle England, a craggy hillside in Snowdonia or a deserted beach in North Devon. Sturdy and beautiful, the sculptures are a striking intervention that spark a vital contemporary conversation.

This is a project of two phases of interaction.

A series of outreach workshops are built into the first half of the project, where the Anagram team work with local people to have conversations about their hopes and dreams for the future.

Drawings and audio from the workshops are then transformed into vibrant animations, and these play inside the binoculars as a layer over a real-time video feed of the view beyond. Each pair of binoculars has a different animated film on loop – focusing on different ideas and themes, and creating a conversation between the two locations.

The live feed enables people to appear amidst the animations in real time, creating a playful and popular photo and video opportunity and helping to generate social media traction.

After its first outing in Stratford Upon Avon, the piece is now available for touring – with new content made for each site in the same way, or alternative bespoke content using the binoculars as a platform for an unusual perspective on reality. The content could be projection mapped, developed by a specific artist, or in collaboration with certain local groups.

I See The Future was originally commissioned by the Shakespeare Birthplace Trust, the Royal Shakespeare Company and Creative Producers International, to celebrate the Garrick Jubilee weekend 6th > 8th September 2019.

Creative Producers International is a global talent development programme led by Watershed. A group of fifteen exceptional Creative Producers from all over the world are on the programme (which finishes in December 2019), encouraging a new kind of conversation with creative communities, citizens and city authorities, and helping them to become change makers in their cities.

This brief – for a piece of public art to celebrate the citizens of Stratford – was developed by producer Louisa Davies (who works for Shakespeare Birthplace Trust), and Anagram won the commission in January 2019. Unusually for a commission of this nature, the IP of I See The Future lies now with Anagram. 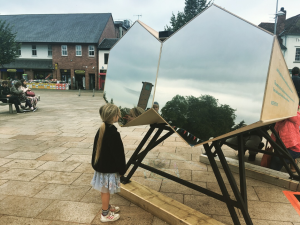 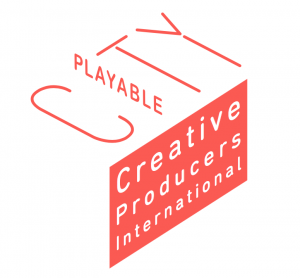