Tell Me What You Really Think

Day Two: I SWEAR TO TELL THE TRUTH (version one) is all sewn up and being chewed on by the public. For a museum, the Imperial War Museum is proving to be fairly adventurous. The Bureau of Alternative Facts is thriving on Level 2, and alternative histories of the objects that have been meticulously researched, found, placed and described by the museum are leaking out all over the building. 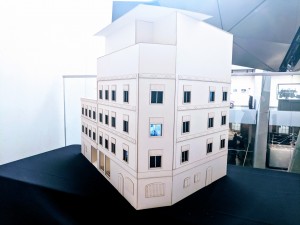 With little time to develop a carefully honed piece of work, I Swear To Tell The Truth pulls together different approaches to interactive work into one journey. Using instructional audio, documentary interview material, a booklet, participatory exercises, and two audio-visual installations, the piece asks audiences to consider why it is they believe what they believe – going from the personal, to the site of the museum itself, to our collective and individual understanding of what is going on in the Syria conflict. You must regard the museum and the people in it, you must imagine what those other people are like and then go and speak to them. You must get involved at the Bureau of Alternative Facts, creating subversive histories for the objects that sit on Level 2. You must read out text written for you – that goes from a serious appraisal of a museum exhibit to a ridiculous claim that could never be true, but feels juicy to say out loud in this subtly-lit, revered place. 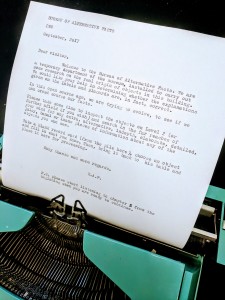 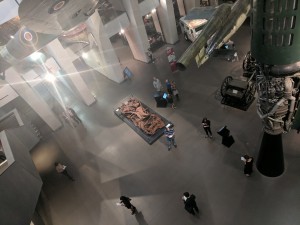 The interactive exercises with other real humans were partly based on the work of a sociologist called Harold Garfinkel, playful architect of the “Studies of the Routine Grounds of Everyday Activities” in the 1960s. He was interested in the unspoken code governing how we behave, and therefore how we think and feel about the world around us. With a willing cast of students, Garfinkel conducted scores of active experiments into our relationships with each other. One of the experiments asked students to engage someone in conversation – and to imagine and act on the assumption that what the other person was saying was directed by sinister hidden motives; they were to assume that the other person was trying to trick them or mislead them. In only 2 of 35 accounts did students attempt the assignment with strangers, and almost all of them were afraid that the situation would get out of hand. Everyone reported an anxiously large amount of rehearsal time in their imagination, wild imaginings of possible consequences and deliberate selections of eligible persons.

We were curious to see if any of Garfinkel’s experiments could be integrated into an experience of this kind – particularly because so much of what he was interrogating was to do with uncovering the rhythm of personal relationships, which when carried out as an active experience can be so live it hurts. Too live, we found out – as, in the testing, the paranoia exercise proved almost impossible to carry out on unsuspecting museum visitors, though it was quite hilarious when simply integrated into the development process (“why do you want to do that?” “I don’t know, it seems like a good idea.” “but, seriously, what are trying to do to me?” “nothing, I’m trying to make a piece of work” “but…” etc.) Perhaps that’s one for the future. 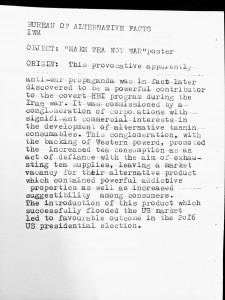 As with most work we make, the audio takes a very personal tone and puts the audience in the position of main character; this is a journey – and you are the hero.

Once there was a man – or, very occasionally, a woman – in a white suit – talking to the camera. They might have stepped out of something similar to that white Jeep you can see in the corner of this room. Today, there is the shaky footage on YouTube of a street just after a bomb has been dropped, or the sweat dripping off a sniper’s brow as the camera slides up his body and stares right along the barrel of the gun. The images – and the voices – have changed. Citizen reporters, bloggers, vloggers, pundits. The child who has access to a smartphone and tweets what she can see as the bombs fall. These voices are in your pocket as you walk down the street. They are on your bedside table when you wake in the morning.

But which stories make their way through the foggy noise, finding you here a thousand miles away – ready to receive? Are they chosen for you or do you choose? And whose voices will you decide to trust?” 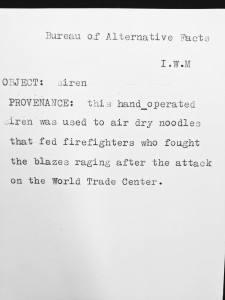 The four interview subjects play their different roles, pushing and pulling the narrative from the personal to the political and into the specific. Tom Stafford talks about confirmation bias and how very unwilling we are, as humans, to be persuaded of a new contradictory fact once one has been planted in our minds. Coming before a brief foray into exploring the relationship between social media and fake news, his work takes on new relevance for how we make meaning and understand the world around us today. We are not set up to skilfully navigate endlessly competing narratives – and rationality doesn’t necessarily help us in ferreting out the truth of what is going on. If there is, indeed, a truth to be found in a complex and evolving conflict with many players and messy international involvement.

Eliot Higgins takes the story into the world of open source investigations and the war of narratives in complex conflicts – particularly, the use of confusion as a political tool. If we feel overwhelmed by too many narratives and start to question what is going on, we retreat – “if you just keep people confused then they become disengaged with the political world and they go back to living their own lives”. Slicing his lines together with an exercise where you must listen and read at the same time – and the text on the page starts to veer off into wildly different territory half way through the paragraph, giving participants an active experience of being confused by similar but competing threads. Only with this sort of participation do the ideas come alive: to feel it in your skin, you must live it and do it. 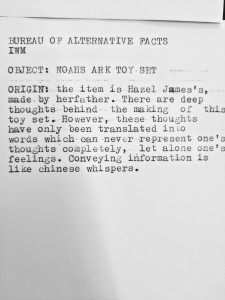 All that has happened up to this point is the sculpting and prodding that prepares you for Syria – you are now equipped to think with particular questions in mind. From this point onwards, therefore, the focus is entirely on the competing narratives that exist, and are publicised in different parts of the world, about the actions of the Syrian government, and their Russian allies. With a small news chamber that broadcasts three different, overwhelmingly large images of news clippings from Russia Today, BBC, Al Jazeera and CNN, as well as drone footage from Aleppo and a Syrian tourist board advert, you are plunged bodily into a specific moment of the war – the siege of Aleppo, and the confusion raging about the competing stories coming out during the final months of 2016. The piece finishes with the extraordinary work of Forensic Architecture, with an interview about their investigation into the systematic bombing of the M2 hospital in Aleppo and a model of that hospital with 7 mobile phones integrated inside. The CCTV footage used in the investigation can be seen playing behind the windows as you circle the model itself. 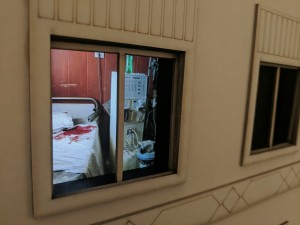 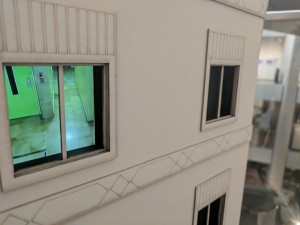 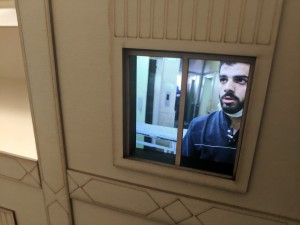 The piece is a scratch, it says on the feedback form, and the main hole in our understanding (as ever, with interactive work) is what it feels like to actually do the whole thing from a fresh perspective – and, in particular, what should happen at the end after you’ve seen the model.

A twisty trick is always the golden chalice, and yet it must be something set up right from the beginning to really work, picking up the mantra of magic spoken by Michael Caine in Christopher Nolan’s “The Prestige”. “Every great magic trick consists of three acts. The first act is called the pledge. The magician shows you something ordinary, but of course it probably isn’t. the second act is called the turn. The magician makes this ordinary something do something extraordinary. Now you’re looking for the secret but you won’t find it. That’s why there’s a third act called the prestige, it’s the part with the twists and turns, where lives hang in the balance. And you see something shocking you’ve never seen something before.”

We’ve done it before and we’ll do it again – but this time, we didn’t have time to find the right trick. But maybe with observing the participants, letting the narrative percolate and swirl around in the mess of real people experiencing the journey, it will find itself and I Swear To Tell The Truth version two will evolve into something different. 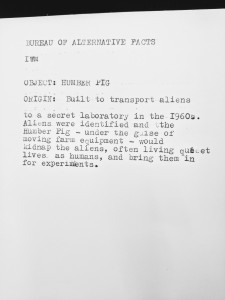 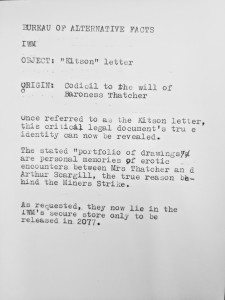