IWM Residency pt1: So what do you think you think about Syria?

The Imperial War Museum of London, a joyously ostentation and imperial looking building dedicated it seems in the main to collectibles from the two world wars, have invited us to be residents over the summer as part of their Syria Season. 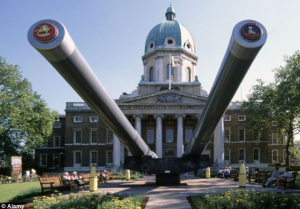 The question we are exploring over the Rnd is; How have we come to understand the conflict in Syria?

What are the battles of the narrative and what are their interests?

And that’s pretty broad – whether that will be the algorithm that pushes some stories to the top of your feed and not others, to the wider political interest which need to frame the conflict in a certain way to ensure a particular political outcome, to the unquestioned assumption and ideas we have about how things are and should be.

But the connection is to expose the invisible network – to run a  Thick Description process on the apparent reality – to expose the architecture of this kinds of knowledge.

‘So what you think about what’s happening in Syria?’

‘Well, I guess I don’t know much about it really. ‘

You know so many many things – you don’t even know what they are.

The idea of Thick Description created by Anthropologist Clifford Geertz – is a method of doing ethnography which leaves nothing out – which collects and describes all the detail pertaining to a situation. You can say a man got into a car. But you can say a white man who is wearing trousers that are made in china on a street that has recently been housing immigrants for Cambodia gets into a red newly watch German sports-car. And you can keep going with the detail. You can go on and on and on – until the air is thick which connections, context, history and ideas. Until all the things that are already there drown you – but there is no blank spaces.

Its a bit like doing a bark rubbing but on reality. 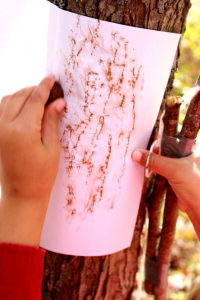 You think its a blank page but its leaning up against a very details system which most of the time you can’t see.

A friend of mine who works at BBC Arabic said the other day with exasperation;

What’s in the subtle change of language? Jonny and Liliana suggested we look at the associations made with certain terms with the handy cultural aggregator that is a google image search. Its a subtle difference uniquely communicable to humans… 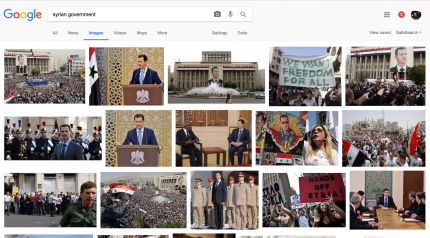 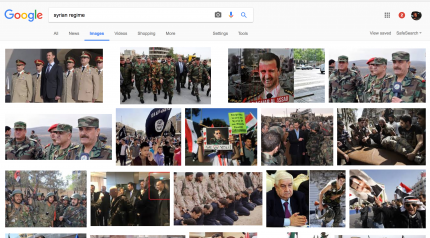 The question might be – not what information is being disseminated by which medias – but what is the bed on which this information lands?

Why does some news feel more satisfying than others – do we want to believe it more than we care to let on – does it feel like a satisfying scratch for a persistent itch?

Introducing an Epistemological Theory of Culture…

Epistemology is the study of knowledge – and this project about Syria is as much m0re an investigation into how we come to know about Syria than an investigation about what is really there. How much does our identity as British, and how we relate to what that means define how we will see a conflict like this. How does the experience of Iraq and Afghanistan define how we approach our relationship with it. In this instance the question is not about us an individuals but us as a community that speaks in a certain way – that has more present that others in its vocabulary certain terms.

We are not just consumers of the culture around us – we are active players in making it real and sharing it with our community. So its spun into our identity and constructs the prism through which we see the world.

Some ideas fit the story better. Are we saviour? Are we respectful onlookers? Are we the dilient accountants? Are we less marauding than the Russians and more civilised than the Yanks?

What images connect to us? Resonating as they invariable do with some others banked in our collective subconscious.

Can we see ourselves through looking at others?

HOW THE RUSSIAN MEDIA IS COVERING THE WAR IN SYRIA

Last year I took part in an action outside the Russian Embassy to protest the bombardment of Aleppo. 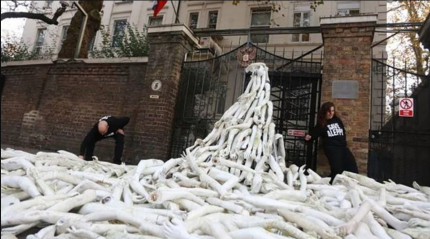 The day after the story of a dozen or so activists locking themselves and the sculpture to the chains of the Embassy there was a story in the Russian press about a retaliatory protest outside of the British Embassy. 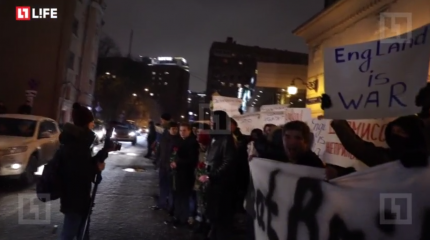 In the video below you see a protestor pour blood over a maps of Afghanistan, Yugoslavia and Iraq and shout – Great Britain is war.  What are these people in London talking about? They are asking – do they think of themselves as less war-mongering than us? Any more sophisticated?

It struck me that the Russian population were experiencing a very different war than we were.

Partly there is the issue of what is not covered – purely on the grounds of what state propaganda allows.

Lev Gudkov, the centre’s director says opinions are based on very specific access to information : “The problems that evoke an angry reaction in the western media, like the developments around Aleppo and the destruction of the humanitarian convoy, are almost not noticed here because they’re not on television, or they’re shown as anti-Russian propaganda.”

On the anniversary of military intervention Russian state newspapers  (I wonder why I even call it Russian State newspapers – would I call the BBC – British State TV?) included this bold statementm – Russia proved that it’s nonetheless a superpower” and “Russia has become the main player in this region … The United States, on the other hand, lost its status as first fiddle”.

There’s also the incredible story of this troll factory in St Petersburg employing people to write comments and posts promoting the government line. Many of the replies to tweets by CIT and Bellingcat looked as if they were made by pro-Kremlin trolls with questionable English and account activity.

The narrative of the Syrian conflict pushed by Russia is this…

the Russian-supported Syrian advance on Aleppo marked the city’s triumphant liberation from terrorists and jihadis. Meanwhile, the images of suffering civilians which have outraged the world and the atrocities painstakingly documented by human rights organizations seem to barely register. They are not in the media at all.

This segment aired on Novosti makes elucidating viewing – It tells the story of the people returning to Aleppo after the bombing – whoop! we get to live on no longer in the company of terrorists. 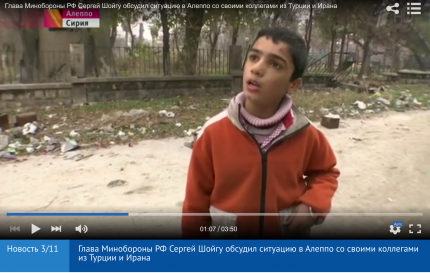 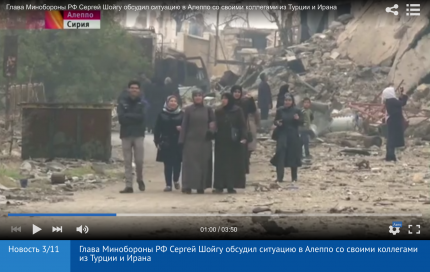 “Peaceful residents are returning to Aleppo’s liberated neighborhoods,” the anchor begins. A reporter interviewed a young boy who had been wounded by an exploding mine. He then followed a crew of Russian sappers clearing mines from the grounds of a school, assisted by a dog named Berta. Aleppo was returning to life as thousands of people filled its streets, the reporter said. “The people,” he intoned, “have heard statements by Western politicians about the delivery of mythical humanitarian assistance to Aleppo.” In other words, the segment implied, Western promises about being on the side of the Syrian people had, once again, rung hollow. Instead, as the next shots of aid deliveries suggested, it was the Russians who were really bringing the goods.

Another noble and heroic gesture from the Russia – now they not the US take the helm as the world’s liberators.

For Russians, instead of ruin and destruction, the battle for the city looked like a triumph of decency and civilization. In a way, the presentation is not dissimilar from how the Soviet “liberation” of Eastern Europe from the Nazis is still taught and remembered in Russia.

A comparison with Western reporting from Aleppo around the same time is instructive. The Independent warned of “house-to-house murder.” ITV News reported shootings of fleeing civilians. Just days prior, The New York Times reported “execution-style killings” and bodies piling up in the streets. In a widely cited quote, the United Nations despaired at the “complete breakdown of humanity” in Aleppo. The Russian reporting, by contrast, made no reference at all to the city’s humanitarian catastrophe. It did not discuss the suffering of civilians at the hands of the Syrian forces it supports in its war against the rebels. Like Assad, it described without distinction all those opposing the Syrian army as “terrorists.” And it focused on subjects that are compelling but very narrowly focused—mine-clearing, delivery of food aid—without providing the wider context of a city laid to waste by Russian and Syrian forces

While undoubtedly offering a clearer account of the war than their Russian counterparts, Western news outlets have also been criticized for failing to give the full picture on Syria. For example, consider this four-minute Vox video that purported to “explain” the fall of Aleppo, emphasizing Russian bombardment and Syrian government atrocities. It presented the battle for the city as a tug-of-war between two sides—the “government” and the “rebels”—of which the government is the only one committing any atrocities. 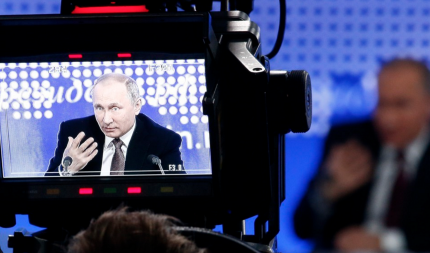 What is downplayed in the Western media is the presence of Al-Qaeda connected terrorist groups.

And its humanitarian organisations that get the airtime.

It would be unfair to paint this however as a equal sides problem of perspectives. The Russian media is not just another angle –

Russian media itself has a different culture than Western media in terms of how it relates to the state line.

What this shows is that propaganda can function fully well without lies. The images come, just they don’t come from the decimated Eastern half of Aleppo. And omission is enough – in fact omission is inevitable.  State media takes advantage of the inherent mismatch between the world, with its infinite happenings, and a news cycle in which only a tiny fraction of the world’s infinite happenings can be presented.

How could you show it all however? Including all the cultural associations that I have but I never even knew that I had?

Is it lack of RAM that means we could never hold all the information in our head.

Is it that there always needs to be a frame and that frame defines the object it gazes.

Here a short and brilliant film recently shared with me from a friend – by John Smith – a filmmaker that loves to mess with perception – here language image and story.