Being someone else: Part One – are you thinking what I’m thinking?

How do two people come to understand each other’s experience of the world.

Anagram are embarking on a new project looking at what it means to understand another human, their world and their experience and to what degree we ever can.

Where would you start?

There is no external way of knowing that two individuals see the same thing. My red might be your blue. And there’s no way I can confirm otherwise. Language unites us but language is not eternal nor does it even transcend a few cultures.

This is something that William Gladstone, British Prime Minister in the 1800 stumbled apon while he was passionately engrossed in reading his favorite writer – Homer.

Homer described both oxen and the sea as wine red, both honey and faces described as green.

Gladstone conducted an exhaustive study of every colour reference in The Odyssey and The Iliad. He makes a register of all colour mentioned – black and white are everywhere, few reds, and a few greens the odd yellow but something pretty startling: No blue!

A few decades later a German linguist discovers that across ancient texts words for colours appear in stages. And blue always come last (The original Hebrew Bible contains no blue)

So what does seeing a different colour feel like when you don’t have a word for it?

Well the answer in some way you don’t. You can test this on the Himba in Southern Africa – so on a grid of greens and blue, they don’t notice that the patches are not all the same. 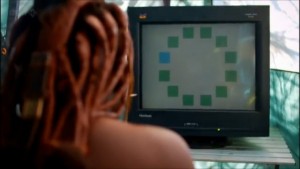 Colour is a pretty pedestrian example. But we like it because it immediately because its seems so basic and self evident. But something a bit broader in Part 2