Being someone else: Part Two – The Case of The Body Swap

The premise of the new project – (first working title The Impossible Divide second working title The Collider mirroring a lack of commitment to whether two humans with different bodies and minds can understand one another or is it a task doomed to fail) – sets two people in a built space. One is inside a virtually generated 360 responsive environment the other is not. They are set a challenge in some way to collaborate – to understand the differences of the other’s perception. There is some narrative of course that pushes them through and other – thats all TBC

A lot of different thoughts sparked this project. One of them is the consistent visceral resistance to the phrase Empathy Machine when used in conjunction with virtual reality. I’m not sure why every reference to it drives me mad. 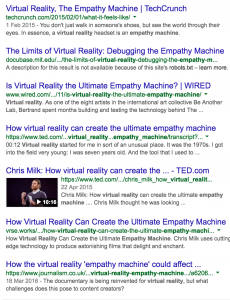 There are interesting and laudable projects that turn up at various narrative virtual reality contexts. The police experience that premiered at Sundance, the story of the Ebola surviver at IDFA, the policy brutality VR experience The Argos Project that we be at Tribeca Storyscapes in a couple of weeks There seems to be a consistent impetus within the storytelling (doc/fiction) community to make claims to a more grandiose objective that entertainment with the production of these experiences. There is a self-conscious need to set themselves apart from the shot-em up game world where VR is used to unabashedly increase your adrenalin, spark genuinely real terror for the pure hearted reason that its a lot of fun to do so and nothing else. 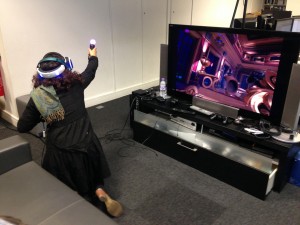 ( Image of myself at Sony last week having a go at some of the work-in-progress experiences that they will launch with the Playstation headset this August. I had to eject before completion because I couldn’t the approaching shark in the deep sea dive world.) 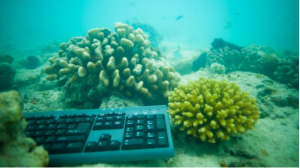 Its not immediately apparent. Why VR needs to talk about itself in this way. Is the media that needs hyperbole onto which a news hook can hang. That may well be the case – but they seem to have unearthed and elevated a large swathe of evangelical spokespeople in the doing so.

The idea seems to stem from a kind of common of wisdom that – I can’t judge someone until I walk a mile in his shoes. 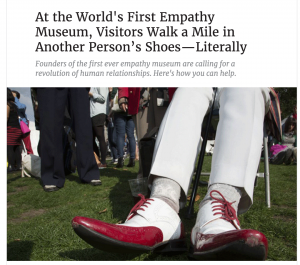 If I was to live in the head of someone’s experiences. If I was to wear their eyes their head, their skin. If people were to talk to me, as if I were them. I would see what it means to experience the world as them.

This has also given mileage for many a viral video on social media also – eg the below. 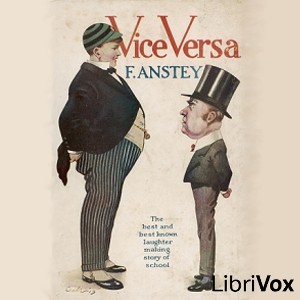 Vice Versa is a Victoria sci-fi novel written in 1886. In it a boy due to return to boarding school after too short a vacation at his comfortable family home, moans to his father that school is torture. The father jeers his son, claiming that school was the best days of his life and his shouldn’t complain. A few moments later they experience what could be thought as the first body swap sci-fi in history.

Father eventually has a shit time at school, kid enjoys tearing it up in the city.

Everyone returns their body at the end – transformed by their experiences forever.  A moral tale that works as much in the mind of the reader as well as the body of the kid.

But actually this isn’t the earliest incident in our collective consciousness – Victorian fiction is  trumped by none other than the Quran. An earlier incident of Body swap is reported in the Islamic version of the account of the crucifixion of Jesus Christ. According to Islamic tradition, at the very moment the person crucified was Judas but who had the face of Jesus.

The desire to move consciousness into new bodies is a permanent feature of our fantasy fiction. 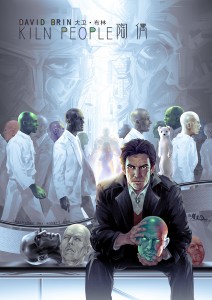 Based heavily in a dualist premise that our minds and bodies are interminably separate. And we could move one around without the other.

But is that the case at all? Could I plop my brain into someone else’s and finish where they left off?

Just to state the obvious here – If there is any science behind body swapping, we don’t know what it is, so don’t know how it would be done.

Which came first the mind or the body?

Lets assume you could do a “brain transplant”  –  of course it would be indescribably difficult; even if you could reconnect the millions of neurones between brain and spinal cord, nerve cells don’t regenerate very well. And this is assuming the eyes and optic nerves are transferred along with the brain, because the eyes are anatomically part of the brain, and the connection between eyes and visual cortex are just as if not more frighteningly complex as those between brain and spine

But how is your mind affected by your body – your consciousness and sense of being. In a new body, the mind now occupies a brain it hasn’t developed alongside/from, so the brain has a lot of features that will be unfamiliar. For example, memories are physically stored in the brain. Even if the newly transferred mind brings its own memories with it, now there are 2 sets of memories in one head (one physical, one purely mental)? That’s going to be disorientating to say the least.

But even if the new mind’s memories somehow “overwrite” the original ones, the brain architecture itself is going to be different. The brain changes over time depending on our experiences. A musician is going to have a subtly different brain to that of a taxi driver; both occupations require completely different skill sets, and the brain layout will reflect this. So if a musician’s mind were to be inserted into a taxi-driver’s body, he would likely find himself without his usual skills, and with an enlarged and active area of his brain dedicated to driving and navigation that he has no idea what to do with. And unregulated brain activity doesn’t usually bode well.

Even if neither body has any such obvious skill, the brain maps the body very precisely via the cortical homunculus, so if you’re in a different body then you’re going to have a differently configured cortical homunculus, which could only prove debilitating at first. It would be like wearing glasses with the wrong prescription, only inside your head and substantially worse.

We recently spent a few weeks interviewing people with phantom limbs ahead of a presentation at IDFA doclab.

The brain perpetuated the sense of the limbs being there long after they had disappeared.  Meaning that people with phantom limbs could suffer maddening itches that would be effectively incurable because noone could itch their missing arm or leg.

Hmm.. bit of a tangent but this is basically thinking around the idea that by looking at a world through Oculus, the sense of being someone is felt misses again the body.

Sticks us in that Cartiesian dualism again. Oh well one day screens will feed us